One of my first assignments was to create a storyboard for a story that follows a typical story structure. Unsure of what to do, I ended up basing it on a psychological game idea I’ve been workshopping for the last few years.

The story is an allegorical take on Carl Jung’s Individuation process, & is based on my own experiences in dealing with negativity & “finding my true self”. It also includes some ideas by Foucault as the story is about imprisonment. 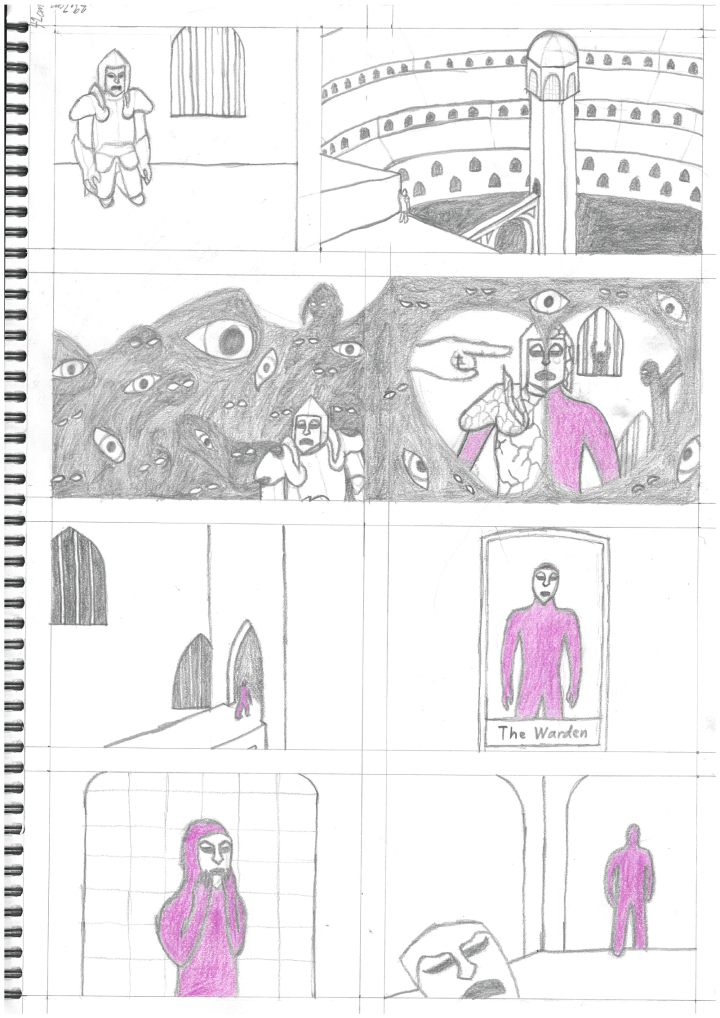 This is a story about a Ward, who awakes encased in heavy plate armour.

They don’t remember who they are, only that they are a prisoner of this vast desolate, yet eerily familiar, structure called the Panopticon. They know the Warden sentenced them here for a good reason, but they don’t remember why. Thus the Ward sets out to find the Warden at their central tower to learn about the nature of their sentence.

On the way to the tower, the Ward is hunted by a mass of shadows. They are too slow to escape & become engulfed by the shadows.

Screaming in darkness, the Ward begins to learn. They see visions of a world before the Panopticon. They see the Warden, & the tyranny they wrought. As they learn, pieces of the Ward’s armour begin to shatter. When the shadows dissipate, the Ward is left unharmed with only their mask remaining.

They continue their journey until they finally reach the tower.

Inside, the Ward stands before a lone mirror inscribed “The Warden”. They gaze upon their own reflection & realize who they were.

The Ward condemns them self, saying they deserve to be imprisoned; yet the Ward lifts their hands & removes their mask. The Mask further condemns the Ward as they are being discarded.

The story ends with the Ward walking away to heal the world.

Note that this is a highly simplified version of what the game story would be. Ideas I had to cut out include:

I consider this to simply be Act 1 of the wider story I have in mind (though this is definitely the most fleshed out section). The moment where the Ward learns the truth of their nature would have also served as a narrative branching point, with returning to imprisonment leading to a “bad ending”.

I’ll be returning to study on Monday so I’ll probably be silent again for another ten weeks. I may post about the animation I’ve been working on, but no promises.