This is the main thing holding me back at the moment. I have about eight regions planned for this map, a maximum of 256×256 tiles to work with, & I want to get a mid level design figured out before diving into the World Editor.

High level layout of the map

I’ve managed to figure out a basic high level layout that maximizes the use of the entire map, giving most regions a size of about 80×80, & I’ve got a basic layout for the Ziggurat subregion, found in the Isles Overland region (I finally figured out a name for “(Middle Realm)”, so simple). I’ve drawn a couple other regions on grid paper as well, though the only camera I have is on a smartphone & I cannot access any files on it through my computer (seems my phone is only smart at draining my prepay). I’ll recreate these with better detail via GIMP. 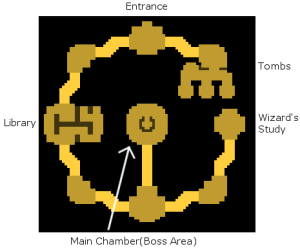 At first this doesn’t seem like much to work with, especially in the Overland regions where most of the action will be. But after working on the Ziggurat design, I started thinking, maybe these constraints are a good thing. It means that players don’t have to travel very far to reach common destinations, like the Village & region entrances. It also forces me to be more creative with how I design the regions. The only downside that crops up in my head is that there wouldn’t be much of a sense of exploration as I can easily see players treading the same paths over & over again. Maybe I could sneak in some secrets somehow, we’ll see.

I’d like to end with a non-standard method of making design documents I recently recalled & would like to try out. Instead of writing a thick design bible that only the designer reads, the entire design is done on one big ass poster, or one-page design document. There’s a powerpoint about it that explains it better than I can, the video presentation is available somewhere on GDC.com as well if you’re a member.

So, next step: finish the map designs, make a one-page design doc out of them, & actually put up that page listing the units I forgot to publish.